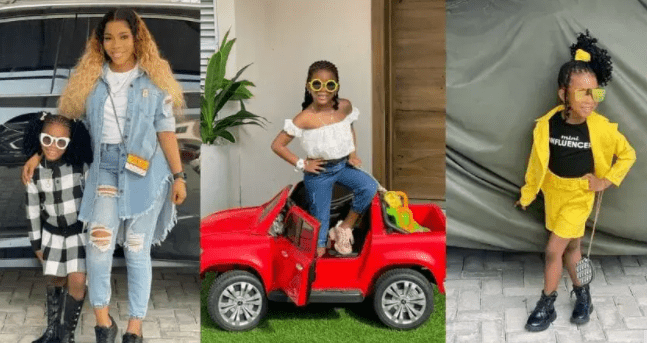 Janell is nollywood actress, Bukola Adeeyo’s daughter. Janell who is currently 4years old  is an online sensation who through the support of her mother has transformed from being a regular kid to modeling as a fashion influencer for children in her category.

Since the explosion of social media across the globe some years ago, Celebrities and Nigerians have progressively explored the marketing effect of branding on social media for themselves and their kids.

Janell, at her yoing age has an instagram account with a fan base of over 91,000 followers while engaging them periodically with sensational kid’s fashion inspiration which is well represented in her media contents. Even her social media biography states that she is a fashion model and brand influencer.

See more photos of the beautiful fashionista below:

Bukola Adeeyo is a popular nollywood actress that has made a name for herself in the movie industry. She recently got a N 1million birthday gift from an anonymous person.

“Jesus Is Good” – Davido Screams As Singer, Victony On Wheel Chair Stands Up During His Concert (Video)

The movie actor, who was born in Imo State, announced the happy news on Instagram.

According to Crowncy Anyanwu, she never saw such big achievement coming earlier in the year.

“Big congrats to me as I splash millions in acquiring a big mansion in lekki…it can only be God !! Earlier this year I never thought of or even dreamt of having such a big achievement to my name , but God in his Infinite mercy made it happen.. I returned all praise and all thanksgiving to almighty God, .. when God remembers you the miracles that follows sounds so unbelievable….. may God bless me more… Congratulations are in order, ” she captioned the photo slide posted.

Remember how Ms. Anyanwu stated in a previous interview that starting her master’s degree program overseas was her greatest dream?

She also made it clear that she is looking forward to getting married as soon as her ideal partner finds her.

“I really want to be married too, but I haven’t seen who God has planned for me,” she said.

I desire a man who shares my understanding. He must have a fear of God and be willing to lavish me with cash. If he complies with all of things, then God really did send him to me.

I have my money, but he should be able to lavish his money on me, money is not always enough for women. We like free money.

As a single lady, I try my best to control my mindset whenever I have a sexual urge. Sex is a thing of the mind, so I take my mind off it as I don’t have a partner yet.”

Anyanwu is also not in support of the general believe that actresses use their bodies for sex to make it in the industry is far from the truth.

She expressed her position on sex for movie roles in her industry.

She said: “Saying that actresses use their bodies to become successful is very wrong because most men, even after sex they will still not give you the role, so sex is not the major thing.

You need to know how to act, sex is something that most men can get anywhere with their money and they don’t need to toy with their businesses.

Movie production is business; someone is investing a big amount of money in it, so the person expects to get his returns. 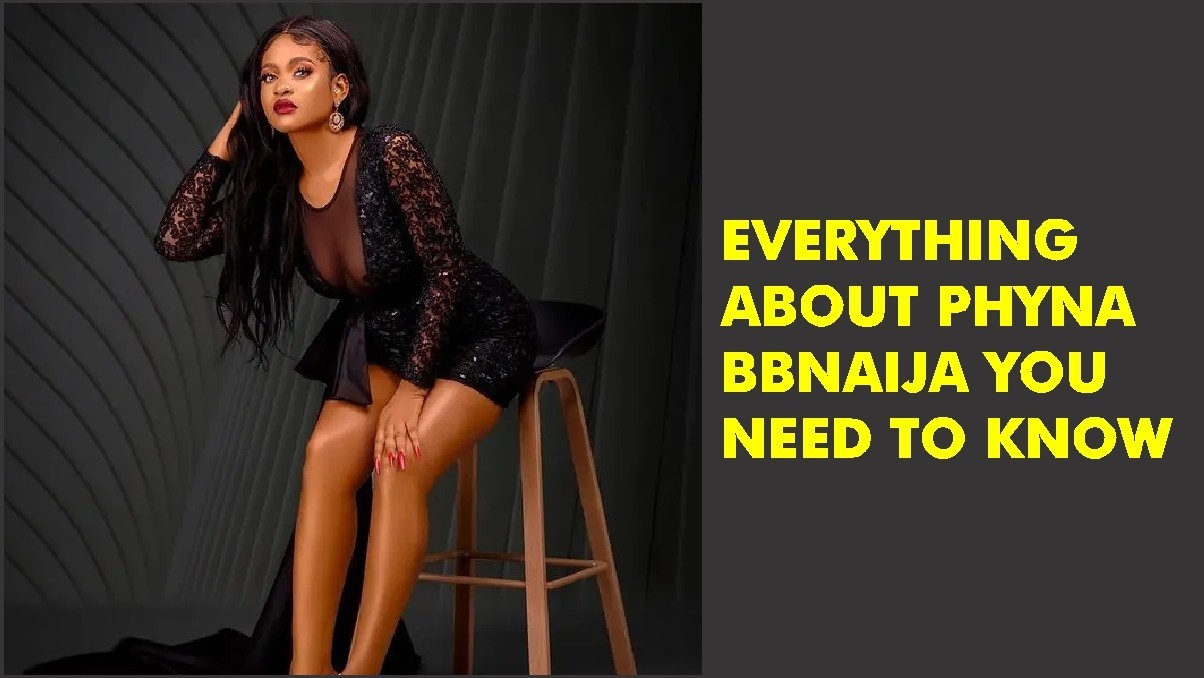 Who is Phyna in Big Brother Naija?

Phyna, with the full name Ijeoma Josephina Otabor, is a 25-year-old hype girl. She hails from Edo State, where she also had her education. She is among the final six contestants. Others are Adekunle, Bella, Bryan, Daniella, and Chichi.

Josephine Otabor (born 1997) is a beautiful Nigerian commercial model, content creator, and fashion entrepreneur who is known by the nickname Phyna BBNaija.

She became famous internationally after she became a reality TV star. In July 2022, she was unveiled as one of the Big Brother Naija show housemates.

BBNaija Phyna was born to the well-respected Otabor family in 1997. She was named Josephine Otabor by her parents, Mr. & Mrs. Otabor.

She was birthed in the city of Lagos and spent most of her formative years residing in the city. She and her family resided in the Mainland axis of Lagos State. She also lived in Auchi, Edo State, for a while. Phyna comes from the South-South geopolitical zone and is an indigene of Edo State.

She comes from a close-knit and religious household. Phyna‘s parents, Mr. and Mrs. Otabor, ensured that she and her siblings were raised in fear of God and good morals.

As a teenager, BBNaija Phyna was a member of her local’s church choir and drama unit. During her secondary school days, she also participated actively in the school’s Drama club.

BBNaija Phyna underwent her primary school education at a leading private-owned school in her community.

She completed her secondary school education in 2013 with good grades in her Senior Secondary School Certificate (SSCE).

After graduating from high school, she was unable to get into the university right away. So, BBNaija Phyna decided to study at the Polytechnic. Phyna is an alumnus of Auchi Polytechnic, which is located in her indigenous state.

BBNaija Phyna discovered her love for modeling during her undergraduate days and decided to build a career in the modeling industry. She began applying for modeling gigs in Edo and Lagos State. She also auditioned for modeling roles in Television Commercials and Ads. She was lucky to be selected for some of these commercial modeling jobs.

By the time Phyna graduated from Auchi Polytechnic, she had built a good work portfolio. She soon got signed to a modeling agency and began to secure more high-paying gigs.

Over the years, she has worked with several small and top brands in Nigeria. She has also built a good working relationship with other professionals in the Nigerian creative space, such as creative directors, photographers, fashion stylists, cinematographers, art directors, make-up artists, and brand managers.

To foster her career growth in the creative industry, BBNaija Phyna decided to become a reality TV personality. She auditioned for a spot on Big Brother Naija in May 2022. After passing through the different audition phases, she was selected as one of the 24 housemates of the 7th Season of the show. She was unveiled to the world on the 23rd of July, 2023.

Since she rose to stardom as a reality TV personality, BBNaija Phyna‘s popularity on social media has increased tremendously.

Thousands of Nigeria love BBNaija Phyna for her beautiful looks. Her beauty has won her many male and female admirers. She has also warmed her way into the hearts of many Nigerians with her originality.

Before Phyna became a Big Brother housemate, she resides in a spacious apartment in Lagos City. She has also recorded success outside the creative industry. She runs a thriving fashion business in Lagos State.

BBNaija Phyna‘s fanbase is called Phynation. They have been very supportive of her since she got into Big Brother House.

The gorgeous reality TV star BBNaija Phyna is 25 years old; she is not married and has no child or boyfriend.

Phyna makes a good income as a model and content creator. 28 Housemates thrilled fans with a lot of unforgettable moments in this season’s BBNaija show which culminates on Sunday night with Phyna’s emergence as winner.

Compiled in this report are 10 unforgettable moments from the just concluded Level Up season.

In Week 2, Beauty Tukara was disqualified from Biggie’s house before the names of the first evicted housemates were released.

The historic early disqualification was shocking to fans and housemates. Beauty was disqualified on August 7th 2022 after earning her third strike for breaking house rules.

She received her first strike for pulling Ilebaye’s hair during a fight and earned a double strike after she threw her wig, glasses and attempted to break Groovy’s microphone during another misunderstanding.

Apart from Beauty’s fight with Ilebaye and Groovy. Another memorable fight is Groophy-Groovy and Phyna Vs Shella- Sheggz vs Bella. The fight started when Head of House, Phyna cautioned Bella over her complaint about leftovers not awarded to her. Groovy and Sheggz defended their lovers.

Other fights are Bella vs Rachel and Chichi, Chichi vs Adekunle and a lot more.

The season started with 24 housemates who were splited into two different houses of 12 housemates each. Level 1 house was better furnished than Level 2 house.

Level 1 housemates such as Eloswag, Hermes and Adekunke mostly won the Head of House and nominated for eviction which made Level 2 house vulnerable to eviction.

Biggie later switched the houses and few weeks later, he joined both housemates together as they all levelled-up.

Chomzy caused a rift in the house when she tried to investigate the alleged sex between her love interest, Groovy and Phyna. The housemates tried to know who started the gossip between Amaka, Chichi and Bella and Amaka was widely accused for starting the gossip.

Fans were shocked when Biggie introduced a new twist as he instructed housemates to nominate three fellow housemates for immediate eviction. The lot unfortunately fell on Amaka. The housemates defended their decision as they complained about her troubles in the house.

This season saw a lot of relationships with Sheggz and Bella – Shella leading the way with drama and fun.
There was also a love triangle for Giddyfia who took turns between Amaka, Diana and Rachel.

Phyna emerged as Head of House in Week 8 which was historic and memorable for the Level-2 housemates who were reduced due to eviction.

She became the first Level-2 house to win the Head of House Game after a dominant record from Level-1.

Deji and Modella were introduced as fake housemates at the start of the second week. They were not eligible to win the grand prize and get evicted until Biggie finally sent them out.

Modella was given a task to disrupt relationships in the house but she couldn’t carry it out because she was afraid of Betrayal.

Deji carried out his task of causing rift and tension in the Level-1 house, further asking to be moved to Level-2 house.

Chizzy and Rachel were introduced as House riders in the third week.
They were also ineligible for the grand prize and eviction and stayed till the last week of the show. Both housemates were given instruction to cause rifts in the house and they performed well in their task.

Chomzy, Eloswag and Doyin were evicted on September 11th but were moved to Level-3 house as guests in a new and controversial twist by Biggie.

They were later moved to the main house to participate in sponsored games, tasks and daily activities as many fans complained about the unfair privilege given to them.

The guests and other housemates thought it was a fake eviction until Biggie sent then out the following week.

Ijeoma Josephine Otabor, Phyna has emerged winner of the BBNaija Level Up S7 by beating Bryann in the final.

She walks away with the conveted 100 million grand prize including N50m cash and N50m worth of other awards from the show’s sponsors.

Do you think we missed anything? If yes, you can notify us in the comment section below.